Check out "Check This Out with Ryan and Brian" podcast 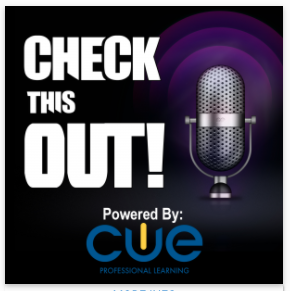 I've followed the great ideas of Ryan O'Donnell and Brian Briggs for a long time on Twitter. On Sunday I discovered their podcast "Check This Out".

What got my attention was when Brian tagged me in a tweet announcing their latest episode. In episode 81, the two California educators spend some time talking about my "Chromebook Crisis" post earlier this winter. Not only are they keeping the conversation going about the need for more more creative uses of Chromebooks, they drew a nice connection to another project already underway.

Ryan has been presenting on and posting with the #CreateWithChromeBooks hashtag since the Fall of 2016 when he launched his own initiative to promote more creativity in learning with Chromebooks.  His efforts are right in-line with what I am trying to do with the Chromebook Creativity Project on this site. One of my favorite ideas these guys mention is who cool a CUE Rock Star  camp would be if it could be entirely Chromebook creativity themed.

Other cool parts of this episode include throwbacks to an app that emulates 8 bit Where in the World is Carmen San Diego? and the new handheld Oregon Trail game device. They throw in some rants too about a few things in edtech that could use an improvement or just hit the bricks. You also have to tip your hat to a couple of podcasters who share their favorite podcasts. Check out their show notes for links and give the episode a listen.

I am off to listen to more episodes....and get rid of the cutesy tile font I changed my Twitter name to. I agree guys, they're pretty lame.
on April 09, 2018 No comments: