There's something that has always fascinated me about the aesthetics of sports. From the uniform colors to the logos to how the helmets and facemasks are built to what is painted on the field or court, I have always been intrigued. Nothing though is more intriguing than exploring every nook and cranny of stadiums and Detroit's old Tiger Stadium had more nooks and crannies than most. It also held more great memories for me than most other stadiums, from my first visit with my grandpa in July of 1980 to sitting in the bleachers with buddies in college.

When I first started experimenting with my Glowforge laser cutter and engraver, an early project I created was a 2d cutout of Tiger Stadium's seating chart. From there the process really began to evolve as I started to create multiple levels and layers.

Apple's Keynote, on the surface a slide deck maker, really was pivotal in the process as my main design tool. Four years ago at Michigan's MACUL conference, I learned how to edit shapes in Keynote and that led me down one rabbit hole after the next due to the incredible flexibility this provides to the tool.

One of those rabbit holes involved me developing a way to create 3D laser-cut stadiums that I make with Keynote. I have a Glowforge that engraves and cuts 3mm sheets of maple into the shapes I create on the Mac. Each shape is a different layer of the stadium that I then stack and glue together. 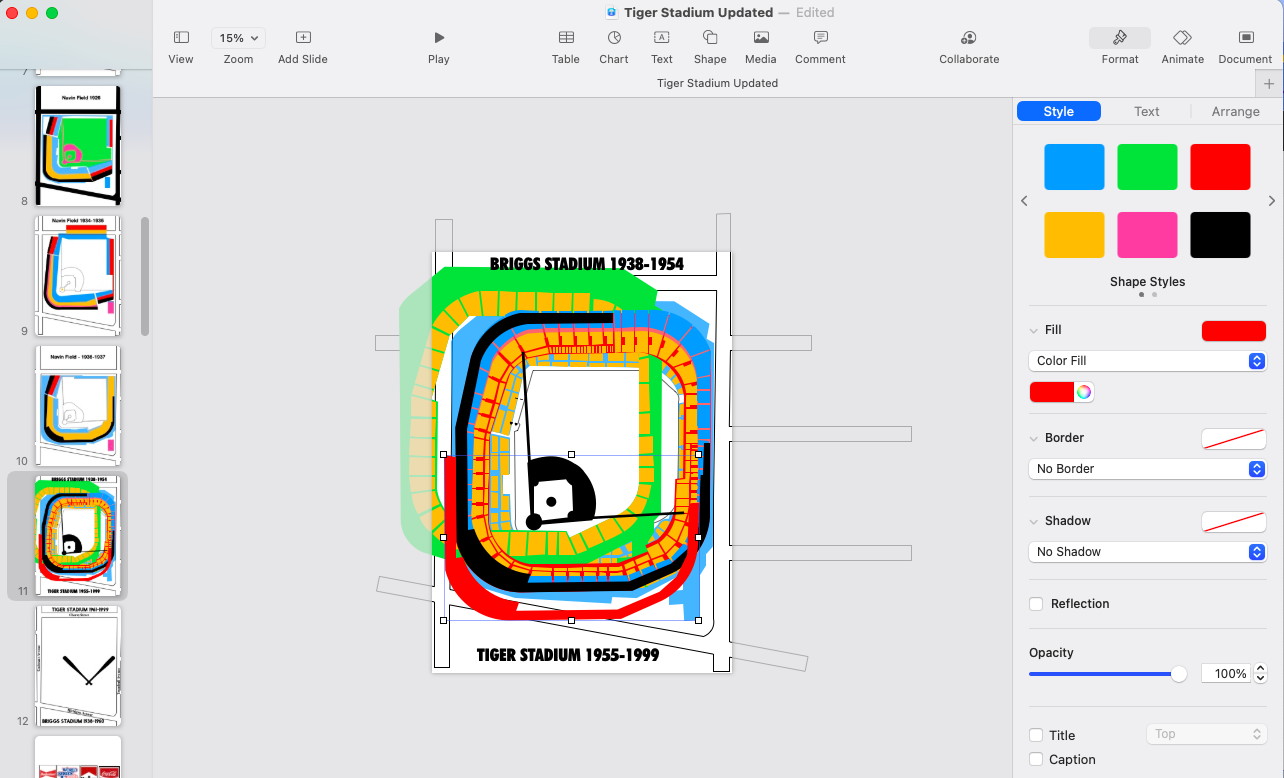 Developing this process wasn't overnight and has taken lots of trial and error with new techniques for achieving the correct depth, perspective, and scale. The only thing Keynote won't do is export these shapes as vector graphics, which Glowforge requires for cutting. I still have to copy and paste them into vector software like Illustrator or Inkscape.

I realized I was on to something when I began to share pictures of my creations on social media (@stadium_fire) and people began to ask to buy custom-created stadiums. Over the course of the last two years, I designed and built close to 100 different stadiums. Everything from high school football fields to the English Premier League, and from that has evolved a thriving business on Etsy.

This summer I decided to tackle two big challenges I had been wanting to do since beginning to build these stadiums. #1 Build a historic set of models that traced the history of what would be known as Tiger Stadium in Detroit and #2 have my stadium art accepted for the big return of Grand Rapids' ArtPrize this fall. 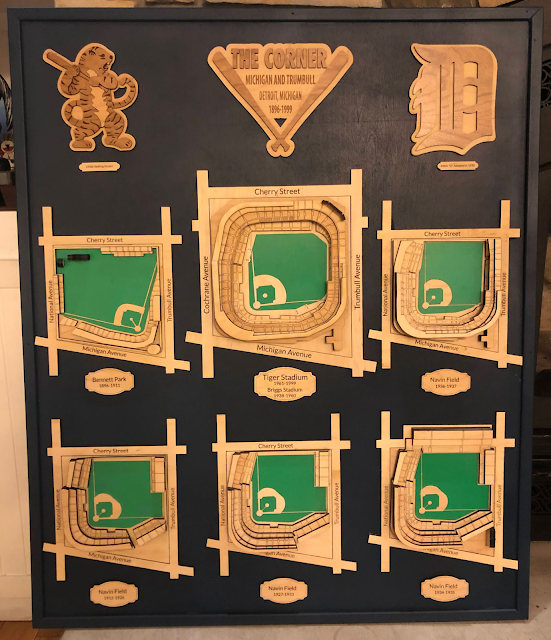 I am proud to report I completed both goals and when ArtPrize opens tomorrow, "The Evolution of Michigan and Trumbull" will be on display at Flanagan's Irish Pub and feature six models from 1896 through 1999. The entire piece is 36" tall and 30" wide.

Through hours and hours of research, I found all kinds of extra pieces of information and details. One really cool one was the art deco batting Tiger that was an accent at the end of each row in the 1920s. With Keynote, I was able to recreate that Tiger and add it to the piece as an accent to the title section. 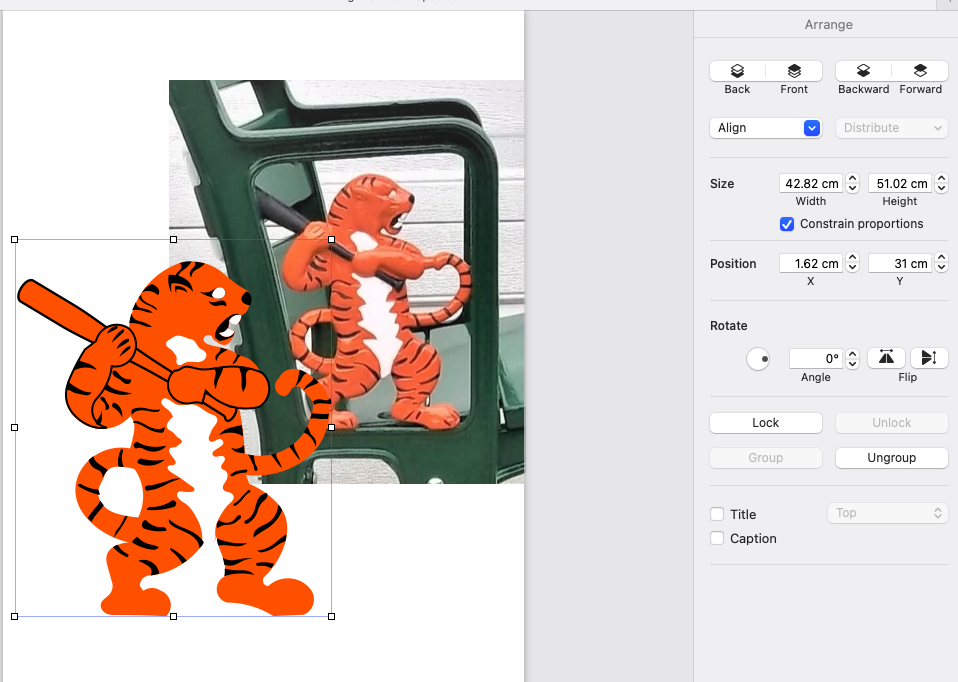 I also was able to re-create the early team offices and ticket booths from old photos with Keynote. 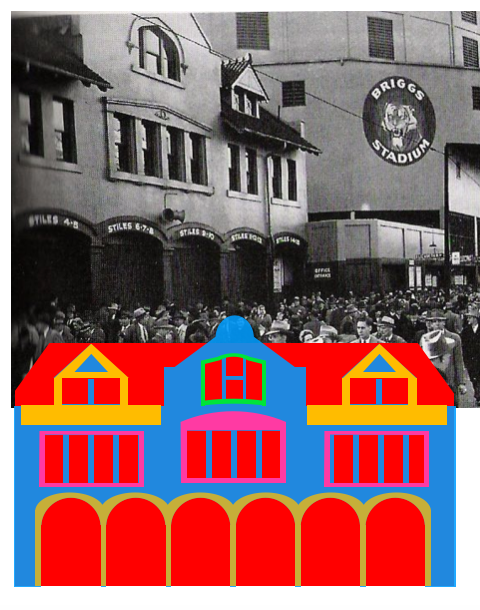 ArtPrize 2022 will feature over 700 artists competing for almost $500,000 in prizes and take over downtown Grand Rapids through October 2 as one of the world's largest free art shows. If you would like to support my ArtPrize bid, you can register for a free account and vote by adding my project to your favorites. Thanks. 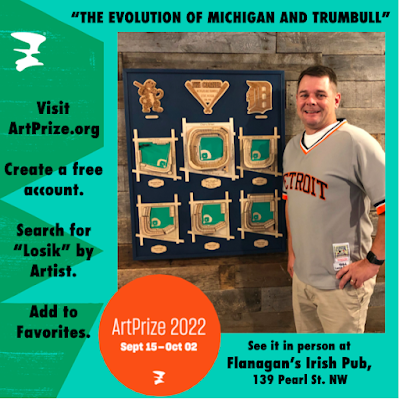